By following through on a handful of projects that fill key gaps in the existing bike network, we can Connect Seattle by bike, by 2021. Join us.

Imagine a Seattle where hopping on a bike is an intuitive option for everyone, all across the city. An 8 year old in the Rainier Valley can safely bike to school with friends, while an 80 year old in West Seattle wheels to the local store in Delridge, and a worker on the Central District rides downtown to their early shift before the buses start running.

It’s a vision that’s within reach; and we’ve got a plan to get there: Connect Seattle.

Increasingly, people are turning to bicycling for fast, affordable, reliable transportation – among many reasons. Yet, right now biking in Seattle is hit and miss. We have a few miles of bikeways scattered through the city – mostly limited to downtown and north Seattle. And while those bikeways are getting more and more people riding, they aren’t enough: they don’t connect, and there are huge parts of the city they don’t come close to serving.

It doesn’t have to be that way: and that’s where Connect Seattle comes in.

If Seattle follows through on a handful of projects that are already in the works – and completes them over the next three years  – we’ll have a basic network of bikeways across the city by 2021. These projects are each pivotal to the bike network because they fill a key gap – they build on what’s already on the ground, and make it functional for more people and more trips.

2021 is an important year: Sound Transit’s Northgate Light Rail will be extending north, connecting even more of Seattle with fast, reliable transit. Creating a strong bike network in time to support this next major expansion of light rail will provide even more people more choices to safely get around Seattle. 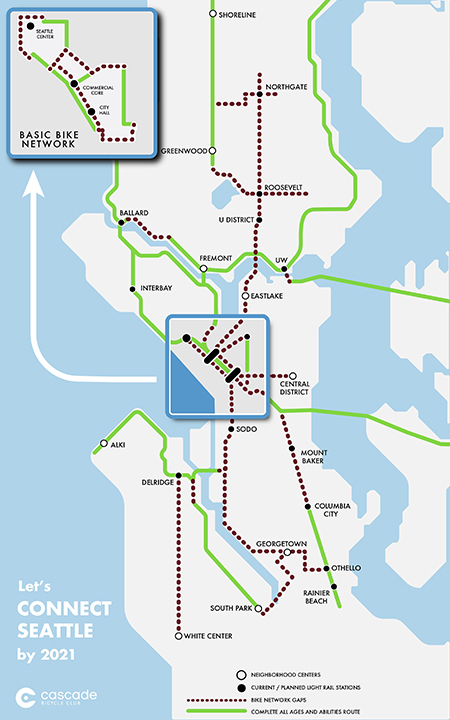 Getting more people on bikes means building connections across the city

Reviewing any Seattle bike map, it’s pretty clear that peoples options for safe, intuitive biking routes aren’t spread evenly throughout the city. Biking in south and west Seattle more often than not involves a white knuckle ride. That stark contrast from north to south is simply not fair, and excludes a lot of people from choosing biking as a transportation option.

It’s a reality that’s at-odds with a vision of bicycling as an option for people of all ages, languages, ethnicities, genders, races, and abilities. The Connect Seattle projects in general, and south Seattle connections in particular are just a starting point to make biking equally accessible, whatever Seattle neighborhood we live in.

Connect Seattle follows tried, tested and successful methods that similar cities have used to help more people get around town how they prefer. In 2009, Vancouver, BC, set some ambitious goals to increase walking biking and transit. With consistent investment and methodically completing bikeways that build a network, they’ve reached those ambitious goals even before the deadlines they set. In less than 10 years, biking levels have gone from approximately what they are in Seattle to now over 10% of all trips. Let’s look to our northern neighbor to become the city we want to be.

Join us to Connect Seattle

To kick things off this fall, Cascade is holding a community training, in the form of our successful Advocacy Leadership Institute, for people like you to gain skills to advocate for a connected network of safe bikeways through Seattle – and connect with other advocates who are doing just that.

RSVP to apply to the fall community training and sign up to the campaign for updates as progress continues. Together we can Connect Seattle.

Cascade Members, meet your Board of Director candidate!