Seattle is making progress in making our streets safer for all. But a vocal minority in a north Seattle neighborhood want the city to roll back its commitment to a safe street project. Mayor Durkan and Councilmember Johnson both back the project are ensuring it stays on track: it’s time to let our city leaders know we stand with them in investing in our streets so that we can all get home safely.

The designs for the 35th Ave NE safety and repaving project follow a proven model to create safer streets – one that that Seattle has put to work on almost 40 city streets since 1970s. The results? Seattle is one of the safest cities in the nation.

But there’s more work to do.

That’s why we need more street upgrades, like those on 35th Ave NE, which advance principles like safe speeds, and added separation for people biking while also increasing pedestrian safety by better protecting people walking from fast moving vehicles.

Despite data pointing to indisputable results of this approach to making safer streets, some vocal opponents to the 35th Ave NE project are bombarding the city with emails and calls, asking them to halt the safety project. Voices in support of keeping street safety projects like this one moving are needed now. Without them, there’s a real threat the city will slow its commitment to making sure we all get home safely.

Here’s what investing in proven safety principles will look like on 35th Ave NE:

That’s why this project is a win for our community. And why both District 4 Council Member Johnson and Mayor Jenny Durkan back the project, and it’s why the Mayor has approved SDOT moving the 35th Ave safety and repaving project to construction.

Tell city leaders now that we stand together for safer streets. Without voices supporting the project, we risk city leadership only hearing from voices that support backtracking on street safety in Seattle.

For people who live, work, visit or shop on 35th Ave NE, the street safety improvements will address long held safety concerns baked into the current, outdated street design. However, there’s been a lot of miscommunication about the plans for 35th Ave NE: with shortcomings in outreach by the city, and a disconnect in understanding by some that one key element of the design – the bike lanes – will bring real, measurable safety improvements for people walking and driving, in addition to those biking. 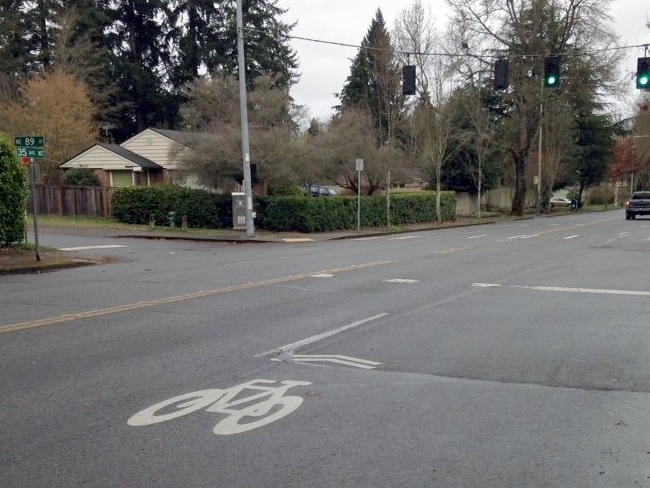 The 35th Ave NE safety and repaving project became an unlikely broadcast news story this spring, after some neighbors and business owners took issue with the project. While the reasons for opposition has shifted over the past few months, it appears that opponents are primarily concerned over loss of some already underused on-street parking. For more context on the 35th Ave NE project check out these links including reading how the design addresses challenges with the current road configuration (Seattle Bike Blog) and builds on community planning started back in 2012 (Crosscut). And how opposition to the project follows a predictable playbook (Seattle Times), despite the fact that the project implements proven safety best practices (District 4 newsletter). 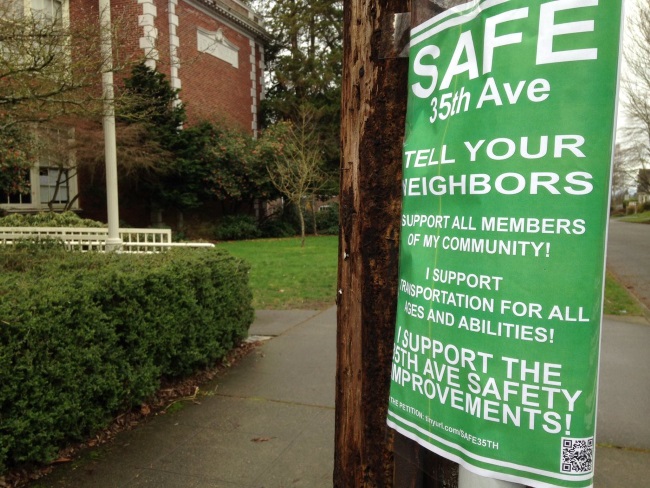 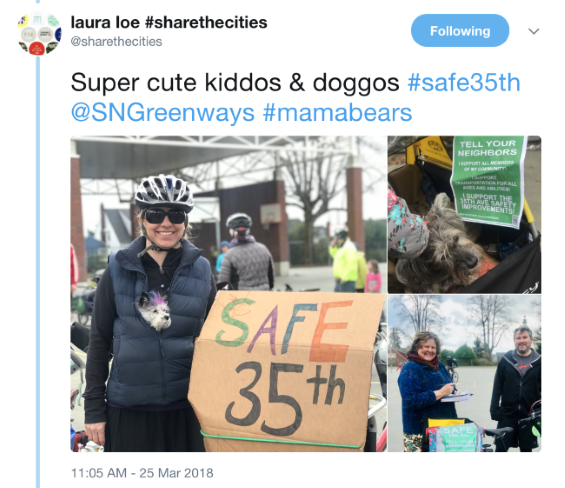 Image: Bike rides, walks and outreach by caring neighbors this spring demonstrate support in the neighborhood.

To be clear, strong support for the project exists in the neighborhood, too: The community group that began planning for safety improvements on 35th Ave NE in 2012, endorses the current design. Another group of caring neighbors started the Safe 35th group earlier this year further vocalize support for the safety project, and to correct misinformation that’s been shared about what’s actually included in the project. 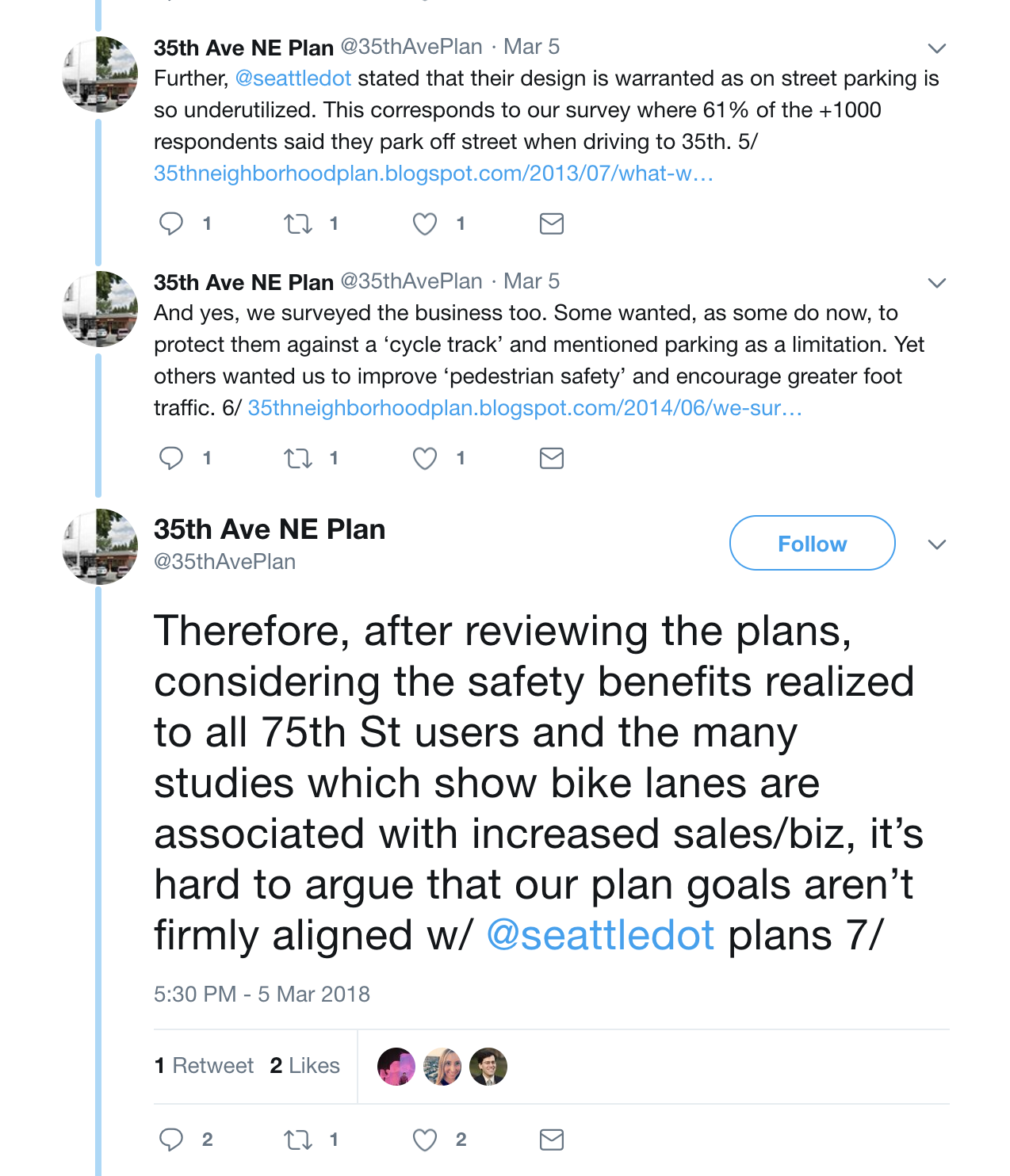 Image: Leaders of the 35th NE Plan, the neighborhood re-envisioning for 35th Ave NE, begun in 2012, back the safety project

Impacts Citywide: We Need to Speak up to Maintain the Course

You may never have heard of or visited 35th Ave NE. However, the danger posed if city leaders only hear from a minority of voices is as real for street safety in every Seattle neighborhood as in northeast Seattle. The city is making progress in rebuilding our streets to better protect people – however they choose to get around – from serious injury and death.

Let’s make sure they get the message to keep it up: Caring neighbors across Seattle need to take a stand to maintain that momentum.

Here’s why this matters to you – whichever corner of the city you work, live or visit: While the opposition to this project follows a very predictable playbook, it’s dangerous in that it advances an outdated and tired trope that “bike lanes are for the few” as a divisive way to maintain streets that don’t even work for cars as well as they could with newer designs.

Telling city leaders now that you support projects like the 35th Ave NE safety and repaving projects is essential.

Cities Have a Responsibility for Safe Streets. Bellevue is Poised to Act