Will 108th Ave NE (proposed design above) be Bellevue’s first Downtown Bikeway? Send a message to say “yes” this Thursday.

The “demonstration bikeway” proposal unveiled by Bellevue last fall will create the city’s first protected bike lane and be a first chance for most people who bike – or want to – to feel safe in downtown Bellevue. Join us at the January 11 Bellevue Transportation Commission meeting to support the demonstration bikeway on 108th Ave NE.

Months in the Making

Over 1,000 people took the city’s online survey about the demonstration between October and December 2017, and the results are clear: 108th Ave NE is the most favored of the four candidate corridors for bikes.

108th Ave NE is a major north/south corridor through downtown that’s home to many large office towers, adjacent to the transit center and connected by bike existing facilities to the I-90 and SR-520 trails. For connectivity and functionality, the bikeway on 108th Ave NE makes sense.

The proposed design for 108th Ave NE includes segments of buffered, protected and striped bike lanes. The visual above shows how 108th Ave NE at 6th Street (by the transit center) could be reconfigured to work for bikes, transit and cars.

For most people who bike – or want to – it’s a first chance to ride to downtown Bellevue shops, offices and homes without fear. But it’s not a done deal, with both Transportation Commission and City Council approval needed before temporary paint and posts can be installed.

That’s why Cascade, business partners and caring neighbors will be attending Thursday’s Bellevue Transportation Commission meeting to speak up in support of a downtown Bellevue demonstration bikeway on 108th Ave NE. Please join us! 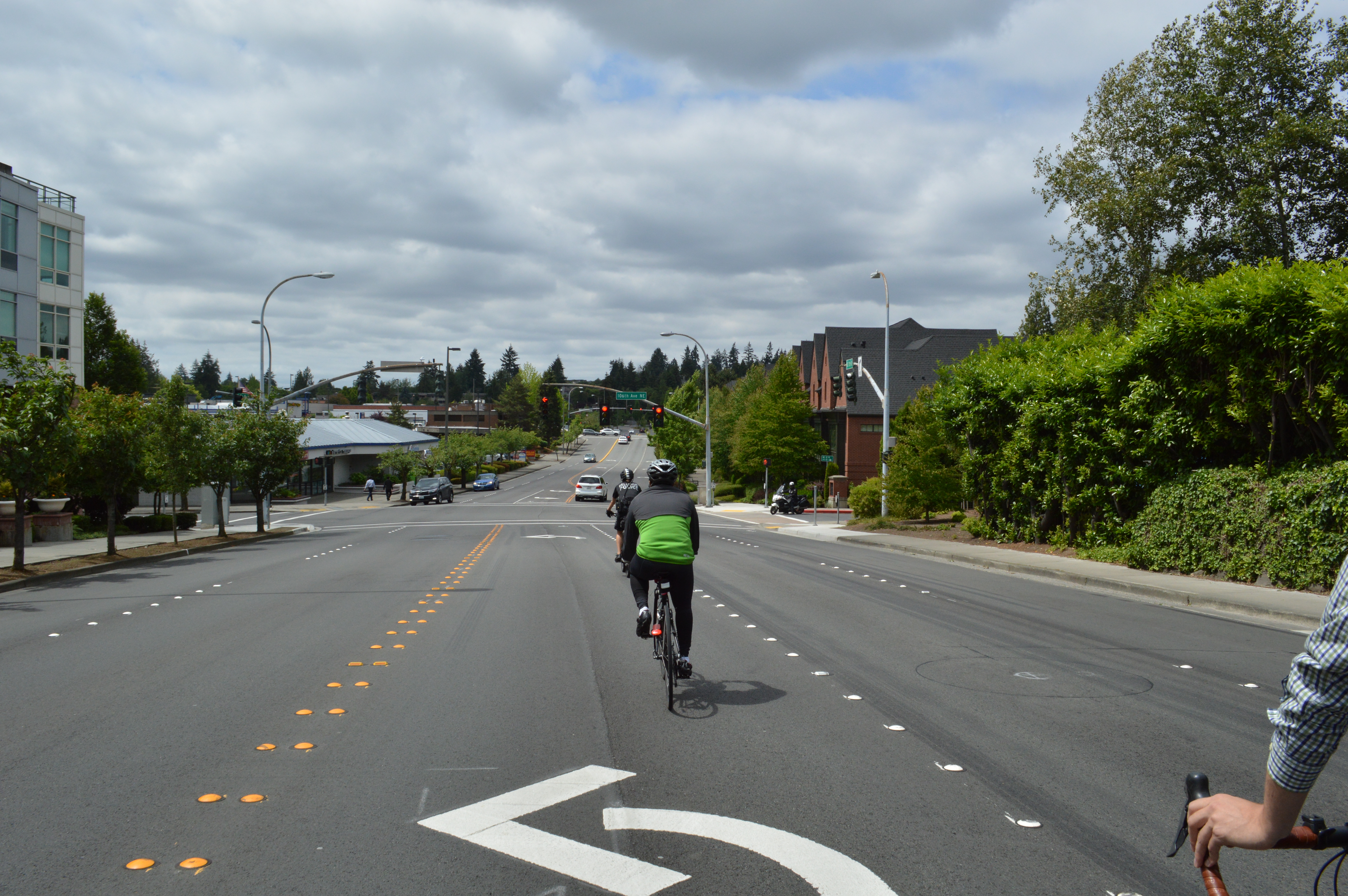 Biking in Bellevue today requires cycling on multi-lane roads and mixing with fast moving traffic – which is why not many people ride downtown.

Making Good on Years of Commitments

Since 2009, Bellevue’s had a stated policy commitment to building two east/west and two north/south bike corridors through the city. Progress started slow, but the passage of the 2016 Transportation Levy, which included specific funds for the Bellevue Bike Network, has advanced several smaller projects east of I-405 (like the 116th Ave NE bike lanes) and in residential neighborhoods.

Yet, downtown remained a challenge, both for Bellevue planners and for the people who want to bike to and through it. The demonstration bikeway would address a long-term deficiency in the budding Bellevue Bike Network by creating a largely protected/buffered lane – necessary for safety given the number of lanes, and speed of vehicle traffic.

Far from a Done Deal - Your Voice is Critical

Bellevue has long planned its city for cars, and more cars. So, even while the new design for 108th Ave NE fits within generally accepted engineering practices for the level of traffic on the road, some Bellevue voices oppose the bikeway on principal.

That’s why you demonstrating support for the bikeway on Thursday is so important.

See you there! RSVP today.

Connecting trails on the Eastside to unlock transportation options