Another mile of East Lake Sammamish Trail opens January 17. At the same time, denial of the final shoreline permit guarantees further delays for remaining segment, and yet another appeal of stop sign orientation in the newest segment could have ripple effects for rails-trails nationwide. It’s time to remind Sammamish City Council that the trail matters to the community, and we can’t wait ‘til it’s complete.

Earlier this month King County crews placed final touches on “south Sammamish segment A” of the East Lake Sammamish Trail – the one mile portion of the 11-mile trail that winds along the shore of Lake Sammamish. A ribbon cutting and celebration will be hosted by trail owners, King County Parks, at 2:00 p.m. on Wednesday, January 17. (Trail Plaza at SE 33rd St. Sammamish, RSVP to King County and reserve a cup of cocoa) It’s a big deal.

The trail is 20 years in the making. When completed, it will provide a safe, connected and protected alternative to the East Lake Sammamish Parkway road. For people who walk, bike and run, the trail will connect Sammamish to Issaquah and Redmond — to the regional trail network and the forthcoming regional light rail network.

For Cascade Bicycle Cub, the East Lake Sammamish Trail is a legacy project. Once it’s complete, the trail will carry an estimated 5-7,000 people per day by foot and by bike. The trail’s legacy for future generations can’t be overstated: Our region is growing. Preserving natural spaces now and setting aside dedicated places for active transportation and recreation is essential to keep us connected to what’s important, and to give us, and our children, travel options that will keep us safe and healthy.

Join Cascade and friends January 17th to celebrate the new segment, and take a walk or ride to take in the beauty of this one-day-completed trail. While you’re there, cast an eye north along the trail to the final segment yet to be completed. 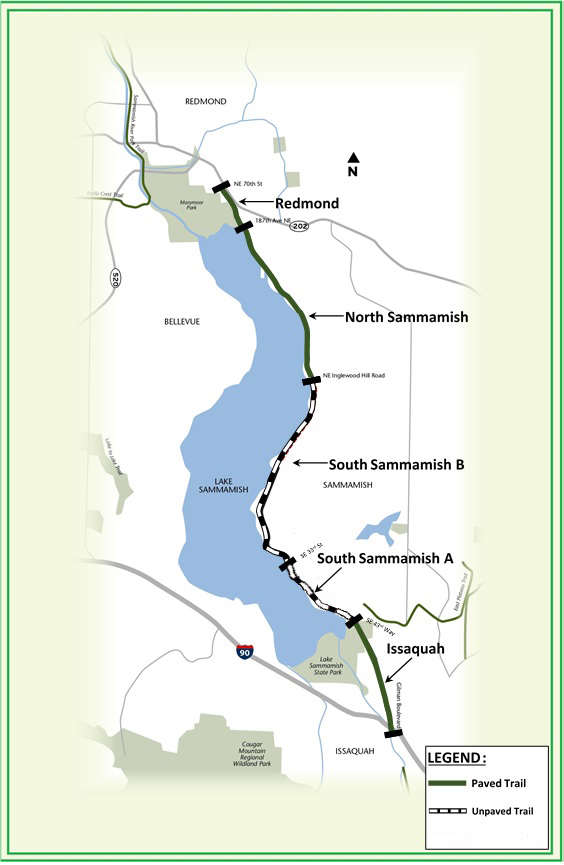 North along the trail is the final 3.5-mile unpaved segment. Just 8 feet wide and of packed gravel, it’s hard to imagine that the entire 11-mile trail looked this way eight years ago. And by 2020 – with the help of people like you – this final trail section too will be completed to safe and accessible regional trails standards.

This final segment through Sammamish has long been predicted to be the most challenging. It’s hotly contested. Lakeside homes are sited close to the trail in this segment. A patchwork of permitted and unpermitted buildings block views, and large privacy fences create a tunnel like effect in areas. Homeowners and the county are locked in litigation, with seeming never ending appeals: this spring a suit regarding trail right of way ownership is to be heard in federal court (the 9th Circuit Court of Appeals). The City is also a key player in this segment, as the permitting authority.

Last November, the Sammamish Hearing Examiner hosted hearings to determine whether the City of Sammamish should issue the shoreline permit for this final segment to King County to allow for design finalization, request construction, and clearing and grading permits. Caring Sammamish neighbors, Cascade and trail users testified at the hearing about the importance of the trail as a safe place for people to get outside to walk, bike and enjoy nature.

The hearing examiner decision, released last week, made for interesting reading. While denying the permit, the examiner did so on grounds that the permit application was incomplete, rather than that the trail needs to be redesigned or narrowed extensively (an argument of the city and the homeowners is that an 8 foot trail would suffice. In reality, it couldn’t handle the number of users anticipated, and 12 feet is needed). In fact, the hearing examiner decision highlights a lot of opportunity, if King County and the City of Sammamish could work together in good faith, towards a shared goal of completing a safe trail that complies to regional standards and is consistent with other trail segments. Whether that level of collaboration is possible, remains to be seen. The two public agencies are deadlocked regarding the orientation of two sets of stop signs on “South Segment A” that dates back to 2015. The issue was escalated last year when the latest appeal ruled in favor of King County. Sammamish has now turned to the Surface Transportation Board to fight the latest stop sign court ruling which favored King County, rather than the city, which wants to orient two sets of stops signs toward the trail, rather than the two small roads that cross the trail.

Petitioning to the Surface Transportation Board this winter, the City of Sammamish has requested to be able to have veto-authority over King County in decisions on the trail right of way. That would require a change to one of the fundamental tenets of federal railbanking rules that have enabled King County’s extensive network of trails on disused railways, and could have impacts on trails far and wide nationally. The petition has attracted the opposition of the national Rails to Trails Conservancy (RTC). Cascade is supporting the RTC’s efforts to fight this petition.

While it seems like a long shot that Sammamish will succeed here, the petition underscores the reality that Sammamish leaders need to know – and respond to – their constituents want a safe trail, built to regional trail standards, and accessible to users of all ages and abilities. Send a letter to Sammamish City council now to let them know that completing the East Lake Sammamish Trail matters to you.

Mark Konyndyk
Tue. Jan 16, 2018 9:27pm
I cannot wait for this to be complete. Great work CBC! Looking forward to the STP and supporting these initiatives for cyclist in the PacNW.