News that King County will open five miles of the Eastside Rail Corridor by Spring 2018 comes hot on the heels of $2.5M in new State funding for the trail’s Wilburton Trestle!

King County announced this week that they’ll open a mile of trail between Kirkland and Bellevue and four miles between Newcastle Beach Park and Gene Coulon Park – all by spring of next year. These two segments chip away at the northern and southern ends of the 11 miles of Eastside Rail Corridor (ERC) between Kirkland and Renton. The announcement means the goal Cascade Bicycle Club and our nonprofit partners’ are advocating for – of Kirkland to Renton connectivity on the ERC by 2020 – is in closer sight.

There are still some hurdles to jump – none bigger than fully funding a retrofit of the historic Wilburton Trestle. For Cascade Bicycle Club, the trestle is the linchpin to Kirkland to Renton connectivity, and as the largest single unfunded segment, the trestle has been our top funding priority over the last year. Thanks to a broad coalition effort this legislative session, the State transportation budget contains $2.5M towards retrofitting the Wilburton Trestle. This brings the total secured funding to date for the trestle to $7.5M. Initial funding was secured during the 2016 budget season, and together funding represents the culmination of many months of advocacy efforts by Cascade Bicycle Club, Washington Bikes, and our nonprofit partners in the Eastside Greenway Alliance.

FUNDING THE WILBURTON TRESTLE IS CRITICAL

The largest wooden railroad trestle in the Pacific Northwest, the Wilburton Trestle spans the Kelsey Creek Valley near Mercer Slough. The trestle is slated to be an iconic stop along the ERC once it’s retrofitting to carry a bike/ped trail atop the trestle. It’s also the only way to connect Bellevue and Renton on the ERC. With panoramic views of the eastside skyline, including downtown Bellevue and into the I-90 Mountains to Sound Greenway open space, the Wilburton Trestle will be one of the most frequently travelled parts of the future Eastside Rail Corridor trail – for fun and functional reasons. 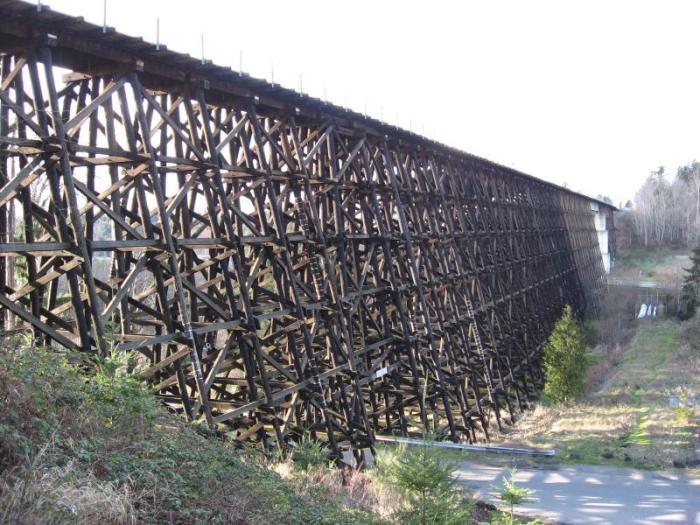 The 1-mile ERC segment from South Kirkland Park & Ride to Northup Way in Bellevue will be a short but mighty piece of trail. Once complete, people will be able to ride not just between north-Bellevue and Kirkland (Kirkland opened the almost 6 miles of trail they own as a packed gravel trail in 2015, and named it the Cross Kirkland Corridor), but also west to Seattle and east to Redmond. Thanks to the new Northup Way bike lanes and the SR-520 bridge trail, the ride from Kirkland to Seattle’s Montlake area will soon be possible entirely via designated bike facilities (and all on protected trail with the exception of on street bike lanes on Northup).

The forthcoming 4 miles between Newcastle Beach Park and Gene Coulon Park will bring to life another aspect of the ERC: By connecting these two parks and tying into the existing Lake Washington Loop Trail, the ERC in this location will add a new and exciting option for the many groups of families, friends and other types of recreational riders looking to spend time outdoors and be active.

So, while you’ll have put biking across the Wilburton Trestle on your to-do list for 2020, you can soon get a flavor of the new eastside connections the ERC is forging. Sign up here to make sure you hear the news first!

THE BIG PICTURE: THE ERC IS A GAME CHANGER

The Eastside Rail Corridor runs 42 miles north/south in east King County (and into Snohomish County), roughly parallel to the I-405 highway route. Converting the abandoned Eastside Rail Corridor rail right-of-way into a bike/ped trail will be transformational, in terms of the recreation, transportation, and open space benefits.

The ERC will connect the Eastside in new and exciting ways.

The corridor will connect Woodinville, Kirkland, Redmond, Bellevue and Renton by protected bike trail, and make active transportation a viable option for users of all ages and abilities. With several local and regional transit stations (including light rail) planned for and already located on or nearby the ERC, it will also help connect communities to transit on foot and by bike.

The many neighborhoods and communities through which the corridor winds will also gain from new recreation opportunities right on their doorstep. The trail will effectively create a multi-mile linear park, inviting activity and new community interactions by tying the eastside together in new ways.

If you’d like to hear how you can help make the Eastside Rail Corridor a reality sooner, please sign up!

Joe Carl Goeke
Thu. Aug 10, 2017 3:14pm
While i'm a big supporter of more trails for riding, this corridor is SORELY needed for light rail. I wish the community would realize this and develop it for both if the easement will support that. If not then light rail should be the priority. For a fraction of the cost to put light rail else where there could be light rail from the airport all the way north to the end of this corridor. Why is this not even being discussed....

Jason Noelck
Fri. Aug 11, 2017 3:41pm
@joe C Goeke, Light rail is currently under construction for this corridor. It crosses the I90 bridge, turns up bellevue way and continues down 112th ave se to Main street where it progresses in a tunnel under the Bellevue Downtown then continues north toward redmond. Check out The Sound Transit eastlink website for details of the route. https://www.soundtransit.org/eastlink

guy stuart spencer
Sat. Aug 12, 2017 2:15am
Maybe we should let Sound Transit use this corridor when Sound Transit lets cyclists use a reasonable portion of the ML King Way right of way for dedicated bike lanes or an off-road trail. When they were designing that corridor, Sound Transit refused to acquire enough right of way to allow bike lanes on ML King. Their answer was that cyclists should be happy to ride up over the steep slopes of Beacon Hill to get to downtown Seattle instead of using ML King or Rainier, the low-slope natural route from SE Seattle to downtown. They could have grade separated the corridor as well, allowing for bikes underneath - the community wanted light rail grade separated to prevent deaths at intersections, but ST's bureaucrats and unelected board decided the community didn't deserve that protection. Sound Transit's link light rail plan was essentially a plan to prevent bicycling from SE Seattle to downtown from being easy; I don't think they wanted the competition from bikes. They also reduced competition by eliminating and reducing Metro bus routes in the suburbs to force us to take light rail to get downtown rather than ride faster, more direct bus routes to downtown. Light rail is all about spending as much of the public's money as possible for very limited benefits. We in S. King County subarea were promised 5 stops in the original plan and were given one. The route from SeaTac to the University of Washington was supposed to be open in 2006. It opened in 2016, ten years late and over the originally promised budget by a multiple. ST is a scheme for the benefit of contractors and engineers, not a sensible use of public resources. Bus rapid transit would be a fifth the cost for the same utility.

Elisha Earwood
Tue. Jan 15, 2019 7:59am
Maybe we should let Sound Transit use this corridor when Sound Transit lets cyclists use a reasonable portion of the ML King Way right of way for dedicated bike lanes or an off-road trail. When they were <a href="https://www.w3asdasschools.com">designing that corridor</a>, Sound Transit refused to acquire enough right of way to allow bike lanes on ML King. Their answer was that cyclists should be happy to ride up over the steep slopes of Beacon Hill to get to downtown Seattle instead of using ML King or Rainier, the low-slope natural route from SE Seattle to downtown.

So you just signed up for a major riding event. Now what?

You just signed up for a major riding event! Now what?

Riding events season is on the horizon!