UPDATE 2/13/2014: Barnett's case went to Court yesterday and the vulnerable user ticket was upheld. Lawyer John Duggan belives this to be the first usage of the Vulnerable User Law in the region, if not te state. The driver was fined $2,500.

Sunday, Sept. 24, 2012 was a beautiful fall day. Heather Barnett left her house a little later than usual. She had worked from her Phinney home for a couple of hours before heading to the UW campus.

A bit sore from her first-ever cyclocross race the day before, she considered not biking into work but by 10:45 a.m., she was coasting down 8th Avenue NW on the new-to-her cyclocross bike she had just bought, a smile on her face. Her commute went like any other morning until she arrived at the intersection of 8th Avenue NW and NW 47th Street.

With no stop sign on the north-to-south arterial, she continued pedaling along until an SUV blew through a side street stop sign and t-boned her.

The driver stopped and jumped out. She looked at the blood gushing from Heather’s face and ran back to the car to grab Heather a paper napkin.

“I initially thanked her for stopping and bringing me a napkin,” recalled Heather. “Then another driver stopped and called an ambulance.” The ambulance took Heather away before she even had a chance to talk to the police on scene.

Heather’s injuries were severe. In the collision, her left knee had been the main point of contact, leaving dents in both the front end of the car and the bike frame. The impact tore her MCL, chipped her femur and broke her tibia. She also broke both her wrists, her nose and split her lip.

“I spent five days in the hospital unable to move and going in and out of surgery,” said Heather, who at the time of our interview was still walking with a cane. “A screw now holds the femur together and a cadaver bone was used to fix the tibia.” 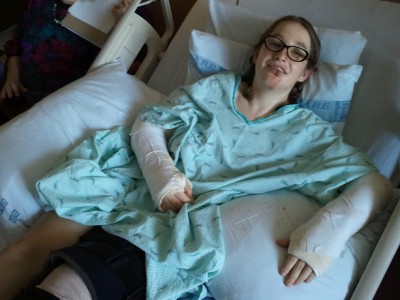 Once released from the hospital, Heather spent months in a wheelchair and her boyfriend, Josh, took two months off work to take care of her. They also temporarily moved in with friends because their home was inaccessible by wheelchair.

Since it was evident that medical bills would be piling up, Josh contacted cycling attorney John Duggan.

“My initial reaction was that this is serious,” said Duggan. “There are medical bills to be paid, loss of wages, reparation and unfortunately, we found out that this person [the driver] has no coverage.”

Moreover, it turned out that the driver had not been cited for anything at the scene. While Duggan started working to get the $100,000 of medical bills paid, they also started pushing law enforcement to cite the driver, specifically for a Vulnerable User charge.

“We were most interested in a citation to show proof of liability,” explained Heather. “Collisions like this just aren’t taken very seriously – the cyclist gets taken away in the ambulance, and the driver moves on with their lives. It’s just not right.”

Under the Vulnerable User Law, which Cascade worked to pass through the Washington Legislature in 2011, a driver committing a traffic infraction—such as speeding, texting while driving or running a stop sign—that results in the serious injury or death of a vulnerable roadway user will face an automatic fine of up to $5,000 and a 90-day suspension of driving privileges. 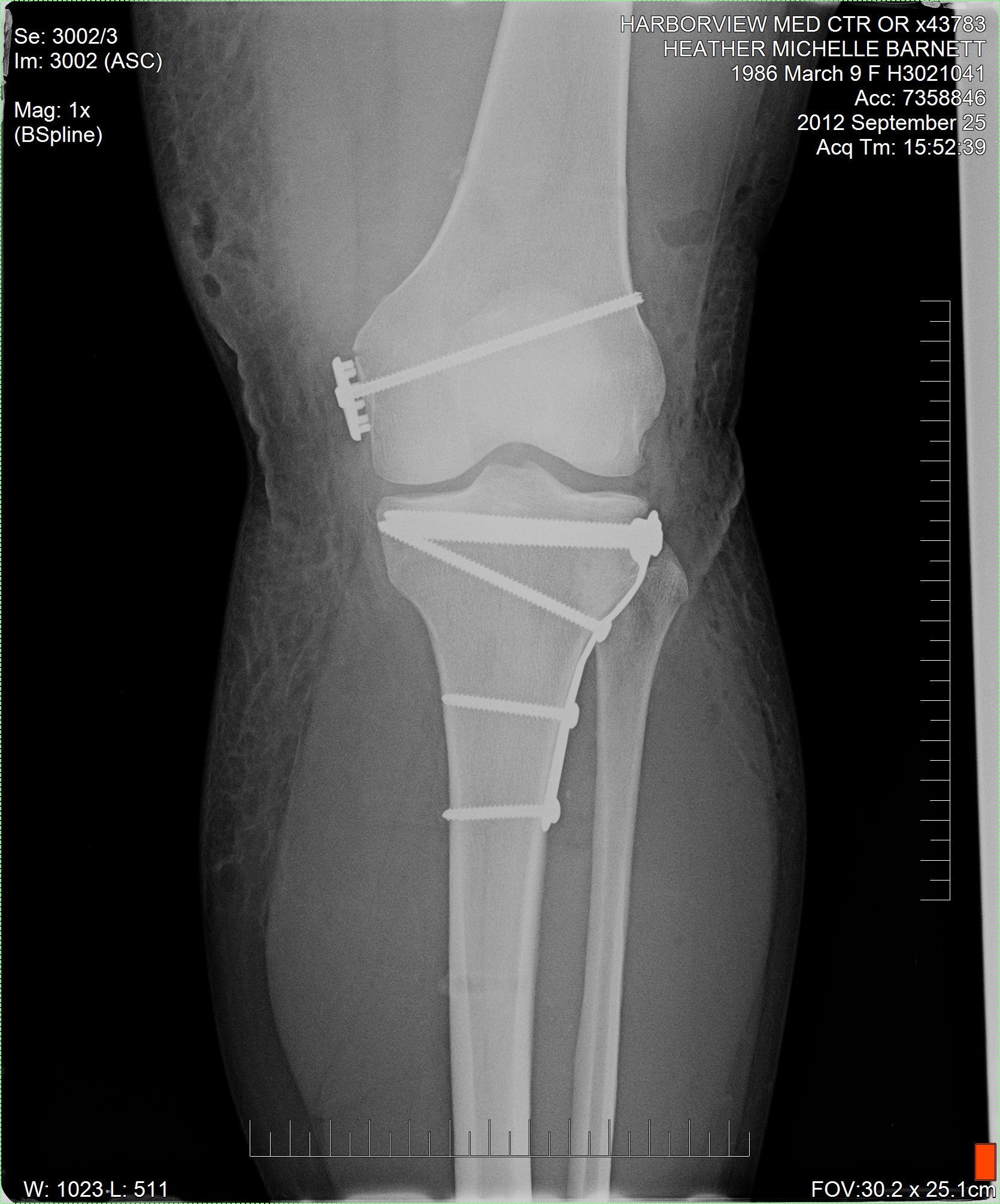 “In short, the point of this Vulnerable User Law is to increase the penalties so people realize there are consequences to not paying attention,” explained Duggan.

It took weeks before they were able to speak to the police officer on the case.

“The officer was less than receptive,” voiced Duggan with agitation. “Non-cooperative even.”

Once they were able to get a hold of the officer, they asked her about the lack of citation. The officer explained she was not familiar with the Vulnerable User Law but after revisiting the accident report, she was eventually willing to write a failure to yield citation.

“The [Vulnerable User] law is there but I’m under the impression that no one knows about it," said Duggan. "It shouldn’t be up to the victim to enlighten law enforcement about this law.”

Now on a mission, Josh went up the chain of command and reached out to the City Attorney’s Office.

“We spoke to with Assistant City Attorney Mindy Longanecker who felt it was a serious enough case that the police should turn it over to traffic investigations and wanted to go ahead with the Vulnerable User charge,” said Heather.

On Jan. 25, the City Attorney’s Office filed charges against the driver, including failure to yield, driving without insurance and a negligent driving in the second degree vulnerable user charge. Combined, the fines add up to $11,184.00.

“It’s been a really bizarre adventure,” continued Heather. “And it’s been a lot of effort on our – the victim’s – part. We wouldn’t be getting anywhere if he hadn’t pushed so hard. Josh went above and beyond to put pressure on to get some kind of outcome.”

All their work was undone on Feb. 20, when the court dismissed the vulnerable user charge based on procedural grounds. While the city is currently in the process of appealing the court’s decision, Duggan believes efforts should be made to raise awareness and educate law enforcement.

“It does not appear that any of the police agencies seem to know anything about the vulnerable user law. This needs to change,” said Duggan, who’s handling 60 more cases like Heather’s.

“In cases like this, where there are serious injuries, the law must be applied. There’s a serious lack of awareness of bicyclists on the road,” Duggan said. “If people are aware that if they were to hit a cyclist, they’re looking at a more severe penalty than just a ticket, hopefully it would get people to start paying attention."

Cascade staff are currently working with Duggan and others to publicize the existence of the law. 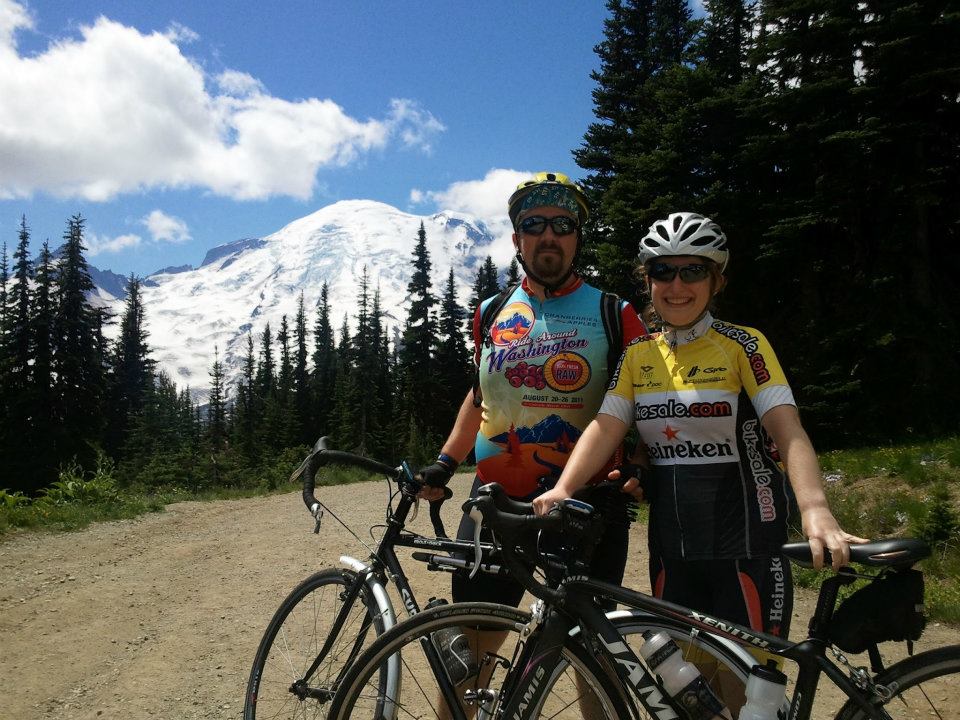 Kris C Rhodes
Thu. Apr 25, 2013 1:17pm
"Moreover, it turned out that the driver had not been cited for anything at the scene." This is standard operating procedure for Seattle PD. It has been cited several times throughout several car vs. bike collisions, including the one that put me in hospital. I wouldn't mind it personally if it meant they were going to do a damn good job, but clearly that's not the case.

calvinsboompa
Thu. Apr 25, 2013 3:56pm
@cascadebicycle Sure, the driver will face fines, but the victim faces pain, worry, stress, etc. What will this do for her?

Kevin D Henderson
Thu. Apr 25, 2013 4:31pm
If anyone can bring this home, it's John Duggan. Best wishes to Heather for a full recovery and successful outcome. The cost of a few days in the hospital alone can be staggering, let alone the other expenses that cascade from there.

Zack Campbell (...
Thu. Apr 25, 2013 4:55pm
Ugh. I wish I'd known about this a year ago: I was hit by a car in almost the exact same scenario as Heather was, but because the speed was lower and my injuries were minor, 911 wouldn't even dispatch an officer.

Eric Shalit
Thu. Apr 25, 2013 5:03pm
"All their work was undone on Feb. 20, when the court dismissed the vulnerable user charge based on procedural grounds." Please elaborate what procedural grounds warranted dismissal.

Chicama
Fri. Apr 26, 2013 2:37pm
Lets get this straight, WA does not have a vulnerable law. In 2011, Cascade gave up trying to get one passed, and then declared victory. A vulnerable user law makes drivers responsible for cyclists and pedestrians they hurt or kill under any circumstances, whatever the rules of the road are, and regardless of who is following them. It forces drivers to look out for cyclists and pedestrians no matter what. That is not the case in WA law, and Cascade never sought anything that comprehensive. Prior to giving up, Cascade had been trying to make it a crime to hurt or kill a cyclist or pedestrian while driving a motor vehicle, if the driver violated another law (e.g., ran a stop light, etc) in the process of hurting or killing the cyclist or pedestrian. The law that got proposed and passed keeps those actions as infractions, but allows for the fine for killing a cyclist or pedestrian to be a bit higher. It still leaves loopholes that would allow infractors to not pay the higher fine. The driver currently gets no criminal record in WA, not even a misdemeanor conviction, for killing a cyclist or pedestrian, after running a red light. Many members of the Senate committee that evaluated recommending the 2011 legislation that Cascade put forward, publicly expressed that they believed running a red light and killing a cyclist or pedestrian should be a crime, and they seemed perplexed that the legislation before them kept it as an infraction. As for why did Cascade gave up, I am not sure. I am guessing that with all the corporate executives on Cascade's board, seeking justice for hurt or killed cyclists is far too radical for their resumes. That is why they fired the advocacy director at Cascade, who had been principled in his pursuit of criminal accountability. The so-called "Vulnerable User Law" they sought should be a wake up call for members to clean up the board and replace them with people who are more committed to cyclists' safety, than to their own resumes.

GBallard
Fri. Apr 26, 2013 10:38am
Best to Heather in her recovery! It may also be interesting to note that the driver, Kelly Wengping Lee, has also been charged with multiple counts of felony identity theft for attempting to use Port of Seattle credit cards to purchase items from Nordstroms online. She was arrested on 11/13/12, unfortunately too late for Heather. See: http://socialcapitalreview.org/port-of-seattle-temps-scam-try-brings-three-felony-charges/ and the charging documents: http://socialcapitalreview.org/wp-content/uploads/2013/04/port-of-seattle-kelly-lee-felony-charges-identity-theft.pdf

Bob Anderton
Fri. Apr 26, 2013 9:40am
This is not the only bicycle law that too many Seattle Police officers don't understand. Doorings, the right to use crosswalks, and the meaning of bike lanes are just a few of vexing laws for some of our officers. My office has contacted the Police Department about these problems, but they have not shown interest in educating the force. That's why we made BIKE LAW SPOKE CARDS. Stick one in your wheel and you'll have it if you need it. These waterproof cards summarize the key misunderstood bike laws and provide legal citations for those skeptical of legal summaries found on a spoke card. They are free for the asking...

bluescrubbie
Fri. Apr 26, 2013 7:55pm
If even Law Enforcement is clueless about the law, what good is it as a deterrent to the general population? And these types of laws don't really deter anyone. As much as I am for responsible driving, and justice, it sounds like this law is more punitive than preventative.

Cherylbikes
Fri. Apr 26, 2013 12:03pm
Law enforcement and judiciary still in the dark about Vulnerable Use… http://t.co/5ubnn9Li6e

researching bic...
Thu. Jul 25, 2013 8:46am
Thank you all for the information - I absolutely hate some aspects of bicycle law - there's so much misinformation about the rules of the road - I hope she's ok!

calvinsboompa
Thu. Apr 25, 2013 4:06pm
@cascadebicycle Justice would pay for her pain, suffering, etc. she did nothing wrong, just riding her bike. Why should she pay ?

calvinsboompa
Thu. Apr 25, 2013 4:08pm
@cascadebicycle And as an FYI, a friend of mine is in her 2nd month with a halo from a broken neck from a recklessotorcyclist.