Bike Month may be over, but Synapse Product Development, a downtown Seattle company, is just getting started -- painting a permanent bike map on an office wall; providing deluxe bike parking, showers, lockers, and tools for last-minute repairs; and operating a winter commuting contest (extra points for rainy days!). Read on for more from Synapse...

At Synapse Product Development’s downtown headquarters, local muralists Matamuros are in the beginning stages of painting a useable Seattle bike map that will measure roughly 10’ x 18’ when completed. This is just one example how a local company is promoting bicycling and bike culture among its employees beyond the awareness-raising Bike Month and Bike to Work Day campaigns. 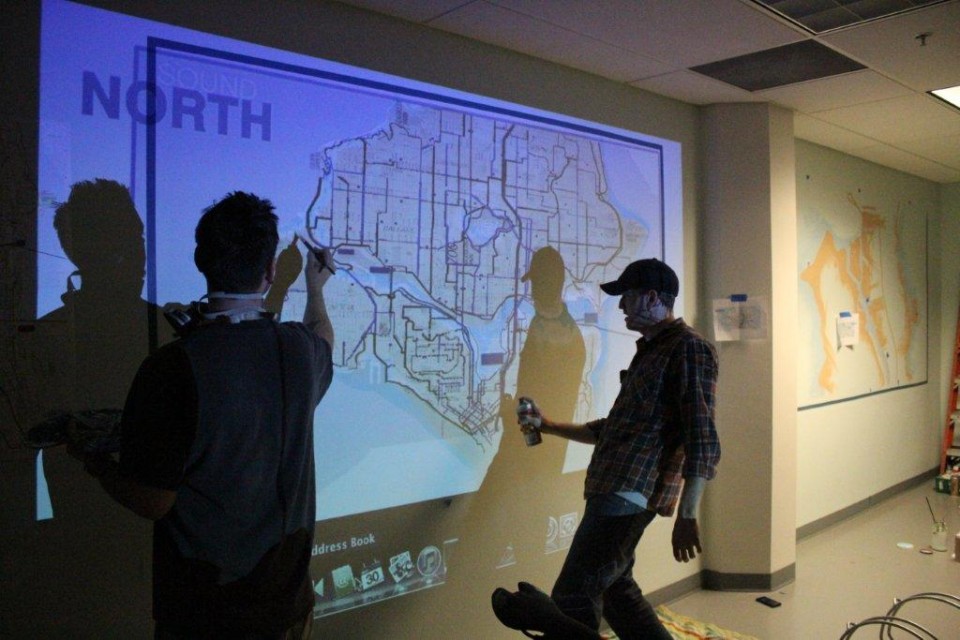 Artists paint a Seattle bike map on an office wall at the Synapse headquarters. If that's not commitment, we don't know what is.

Biking has been at the core of Synapse’s office culture since its inception 10 years ago. Now a 200-person global engineering innovation firm, Synapse recently expanded its support for bicyclists by building out a 20’ x 20’ space for bike parking, plus an assortment of tools and a lift for last-minute bike repairs. Synapse also provides large lockers and showers to its commuting employees allowing them to wash up before important meetings or just starting the day.

Last winter, Synapse launched Synapse Winter In The Hard(er) Rain Commute Ultimate Party or “Synapse Wither Cup", a four-month competition to reward Synapsters who commuted to or from work via bicycling, running, or walking. The competition spanned from November 1 to February 29, with bonus points given for severe weather commutes. Winners received only bragging rights, but “frequent commuters” were given a biking/running jersey bearing the Synapse logo.

Collectively, Synapse logged over 4,000 miles during the WITHER Cup with 60 percent of participants commuting by bike. Even with the increasingly limited accommodations available to bicyclists at the office, Synapse continues to promote bicycling as a transportation alternative as the company grows.

Is your workplace ramping up its post-Bike Month support for those who show up for work on bikes? If so, we want to hear about it! If not, what would help you keep the momentum going during the other 11 months of the year?

Kris R
Tue. Jun 5, 2012 9:12am
Microsoft has recently invested money in to several "secure" access bike cages, to either increase capacity or secure the existing bikes. Each of these cages has a repair stand, a pump, some equipment lockers, floor mounted bike racks, enhanced lighting, and security cameras pointed at them. The total increase across the entire Redmond campus is approximately doubling the capacity.

Merlin Rainwater
Tue. Jun 5, 2012 8:38pm
Clearly, Synapse does not view cycling as an "alternative" mode of transportation. Cycling is transportation, a preferred mode, a sensible mode, a good choice. Driving, especially alone, should be considered a last-ditch, unfortunate alternative for desperate situations.

Finding your groove at Cascade

Cascade Members, meet your Board of Director candidate!