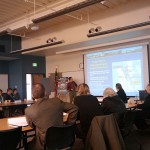 If you live or work in South Park or the Duwamish industrial area, you may be concerned that you'll be dealing directly with viaducts and construction for a good long while.  (Yes, that's plural: Spokane Street Viaduct and Alaskan Way Viaduct.)  You're not the only one.

Leaders from over 10 agencies like the Coast Guard, Sound Transit, the FAA, SDOT, the Port, King County Metro and WSDOT came together yesterday for a panel discussion and meeting moderated by Seattle Port Commissioner Gael Tarleton.  The aim?   To share ideas and come together to build working relationships before, as Dave Gering, the Executive Director of the Duwamish TMA said, there will be "eight years of persistent disruption."

Disruption, yes.  But we see an opportunity for the bicycle.

Cascade was well-represented and well-received at the meeting.  We are, in fact, working with the Duwamish TMA as part of a federal grant awarded to the Port of Seattle.  We're assisting in documenting current conditions for bicycles and assessing and prioritizing future infrastructure needs -- and you can help in the effort.

If you ride through the area and have thoughts about routes, conditions and top recommendations for improvements, contact Tessa, Cascade's principal planner.  If you are interested in the outreach angle, get in touch with Serena, Cascade's outreach coordinator.  Together, we can take what will be a disruption (traffic-as-usual) and help build a safer, more connected and better bicycling infrastructure.