What the heck is that?

Pedaling down 58th Street in Ballard or along the I-90 bridge trail over the past month, riders may have noticed some mysterious new infrastructure—rubbery diamond loops attached to small metal boxes—spanning the path. Say “hello” to Seattle’s newest bicycle counters!

The sensors were approved back in September, and the Seattle Department of Transportation (SDOT) announced this morning that seven new electronic bike counters have been installed throughout the city.

Four counters have been installed on multi-use trails (see map below):

And three counters were installed on neighborhood greenways:

What the counters DO (and don't do)

Like the Fremont and Spokane Bridge counters before them, the new generation of sensors will help SDOT collect data on ridership to help assess the effectiveness of bike-friendly projects and better serve the bicycling community.

“It is important to use our limited funds wisely and data driven decisions help us do this,” said Kristen Simpson, SDOT Plan Implementation Manager. “Collecting bike and pedestrian data helps guide our investments and measure our progress while building a transportation system that gives Seattleites great travel options.”

Unlike their predecessors, though, the new sensors do not feature display totems that show a running count.

"While these bike counters may not offer the instant gratification of being visually counted like the Fremont and West Seattle counters, they are an important addition to SDOT's measurements of Seattle's progress toward getting more people to travel by bike,” said Jeff Aken, Principal Planner at Cascade Bicycle Club. “The more data we have, the better we'll be able to plan for and build a safe bicycling network for people of all ages and abilities."

Some, like the Elliot Bay Trail counter, will also count pedestrians.

Starting in February, curious raod users (and data junkies) will be able to track the results on the SDOT website. For a taste of what’s to come, check out the page for the Fremont Bridge counter. Fair warning: with copious data and gorgeous graphs, this page may bring your productivity to a grinding halt.

SDOT says it plans to install three more counters by the end of the year, so keep your eyes peeled. With so many new sensors in place, it's time to hop on your bike and be counted! 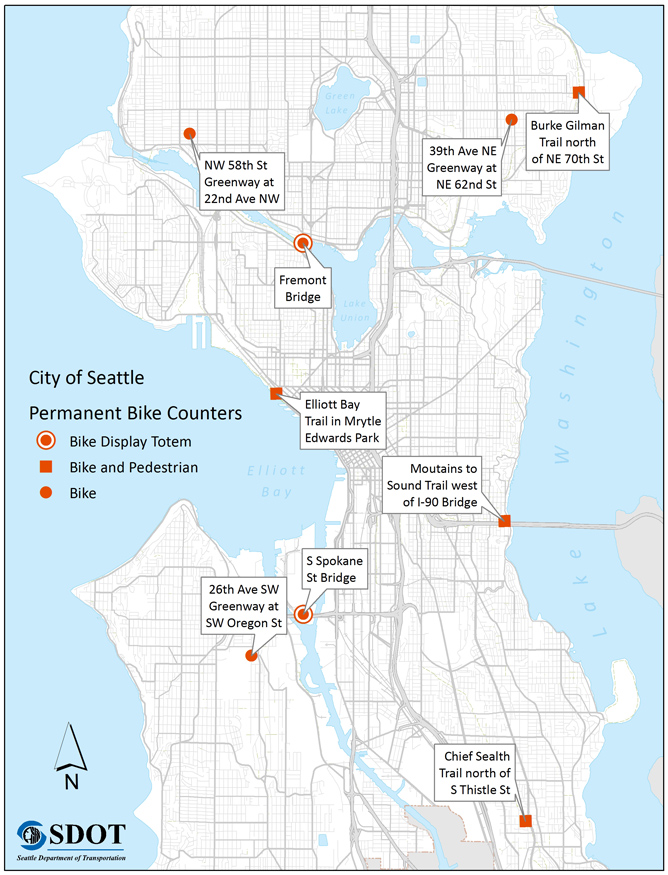