Cyclist struck by driver on Dexter Avenue, left unconscious on side of the road

August 27 update: Police have informed us that the collision was not a hit-and-run as was initially reported. The driver was cited on the scene. "It was the behavior on behalf of the cited party that led to the collision," stated Officer Sean Whitcomb.

On Tuesday, Aug. 14, Jerry Scott was riding his bike from his North Seattle home to his office in West Seattle as he does so many mornings. Jerry, a longtime Cascade member and 2011 board of directors candidate, was enjoying his summer morning ride until, less than halfway into his commute, he was swept off his feet by a car, hit the pavement and remained unconscious for 30 minutes. 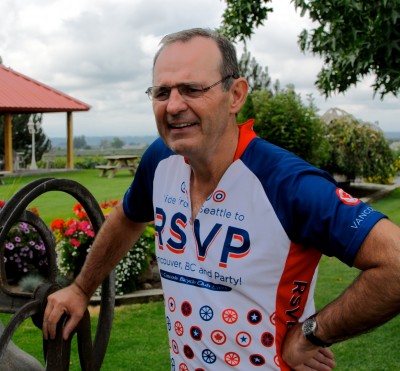 Jerry was transported to Harborview where doctors discovered that he has five broken ribs, a punctured lung, and a serious concussion. He remembers little about the collision but recalls that there were other people on bikes around him. (Were you a witness?)

The intersection where Jerry was hit is just a mere two blocks away from the spot where a ghost bike memorialized the death of bicyclist Mike Wang for months. He had been struck by a hit-and-run driver who was sentenced to more than three years in prison last month.

occasional bike...
Thu. Aug 16, 2012 10:06am
I feel fine riding on the sidewalk on lots of streets in seattle. [Especially Rainier Ave South and MLK]. Please explain why it make a difference where I ride [street or sidewalk] when I am getting from here to over there?

Nathan B Freder...
Thu. Aug 16, 2012 10:28am
When you are riding on the sidewalk, people driving cars are less likely to see you when you are crossing intersections. If you are going to ride through intersections at speeds above, oh I don't know about 5mph or so, it is often safer to be in the street (near where cars might be, as that's what most drivers are keeping their eyes out for). Of course, this doesn't apply to every route or area. There's definitely sidewalk in this town without peds or tons of intersections where it can make perfect sense to ride. If you are clearly visible to turning traffic and not running down peds or cruising past shop doors, no problem.

Hay
Thu. Aug 16, 2012 11:12am
Anyone have the time? Better details on the location? I was at the Dexter/Denny light, on Dexter, heading North at 7:19 am (by that digital sign on Dexter) When a black sedan type car heading South on Dexter (not a car person but if this may help I will google car types to see if I can get a better description) ran a red light to head east on Denny Way. Could be just a jerk, but thought I might mention it in case it might help? And for the sidewalk cyclist. My teen age son (like many teens) did not listen to my warnings about NOT riding on sidewalks and he was hit on 2nd and Denny. He had the Walk signal, but that crosswalk is in the shade from trees (another VERY dangerous spot). The driver did stop :) and my son does not ride on sidewalks.

Bob Anderton
Thu. Aug 16, 2012 1:17pm
This is horrible. If people ever see something like this, please photograph the car's plate as soon as you can. Also, remember if you have car insurance, UIM coverage protects you in situations like this. And, if you don't have car insurance, state Crime Victim's Compensation may at least assist with paying medical bills. Best wishes for a speedy recovery.

Meghan
Thu. Aug 16, 2012 1:50pm
I can understand the tendancy to want to ride on the sidewalk, but you are much more statistically likely to get hit there. I've been hit twice and both times I was in a crosswalk between sidewalks.

Matthew J Clark
Thu. Aug 16, 2012 4:57pm
Riding on the sidewalk is equally as dangerous. Pedestrians are more spontaneous in their choices than cars, pedestrian traffic coming out of doorways is dangerous and crossing streets is a trap since cars aren't looking for faster moving two wheeled traffic entering cross walks and puts you at risk. So, I guess I'm saying that sidewalks are very safe. I had a friend that was taken out by a cyclist once. He was stepping out of a store and was blind sided by a cyclist going way too fast on the sidewalk. It left him with a lot of injuries. Ironically more than he'd ever experienced as a high level road bike racer. So be careful Safety Sycler, they're out to get you on the sidewalk. -m

Matthew J Clark
Thu. Aug 16, 2012 4:59pm
Editing myself here: Sidewalks are NOT very safe. Putting you and the pedestrians and motorists at risk.

Randy S Near
Thu. Aug 16, 2012 6:49pm
I rode passed the accident at 6:58 and by that time the paramedics were working on him. I wish him well and a speedy recovery, as for the driver he/she will eventually be caught and suffer the punishment. Very disturbing.

Liz Diether-Martin
Wed. Aug 15, 2012 6:18pm
Best wishes for a fast recovery for Jerry! Anyone know if hit-and-runs have become more common in the last few years? Sure seems that way. Shameful behavior. Sigh.

JAT
Thu. Aug 16, 2012 8:32am
"inevitably?" indeed not. Lots and lots of people get around on bikes successfully every day. Without resorting to calling you the name you invite us to (and heaven forbid without using the word "vehicular" as it creates undue excitement) I will say: generally speaking bikes don't belong on the sidewalk - people who do that are P.O.B.s (pedestrians on bikes) and that's not going to do us any good at all.

Safety Sycler
Thu. Aug 16, 2012 7:56am
Call me chicken s**t, but I ride my bike on the sidewalk. Sharing the road inevitably results in a biker on the pavement.

Greg J Felton
Fri. Aug 17, 2012 5:10pm
So apparently the punishment handed out to Mike Wang's killer on August 10 didn't deter a hit &amp; run just 4 days later. I don't know if 3+ years in prison was enough of a penalty for the crime, but I thought it was a positive sign that law enforcement and the courts would not go lightly on a motorist who hits a bicyclist and flees the scene. And I hoped that people took notice. Glad this cyclist is ok, and with any luck we will see justice soon.

Thinking about donating a bike?