Northgate… if you don’t live here now, you might in the future.

Before I scare you away with the mention of “intensive development”, you should know that you still have an opportunity to inform how this area develops.  With Sound Transit’s light rail moving full speed ahead to Northgate, Sound Transit, King County and the City of Seattle are very interested in your input. One upcoming opportunity to provide input is at Sound Transit’s Nov. 9 Northgate Station meeting.

The discussion at this meeting will focus on the 30% design plans for the Northgate Station, and there’s always an opportunity to discuss the importance of access to the station -- particularly for bikes.  We urge you to bring this up; without community advocacy -- your voice -- we're concerned that the Northgate area may continue to prioritize access for automobiles. There's talk of a new parking garage -- but little mention of bicycle improvements needed in the area.  We need your advocacy to ensure that bicycle access is a priority for all the agencies involved in the redevelopment of Northgate.

Now, if you fall in the category of readers who don’t currently live or work in the Northgate neighborhood and thus feel unaffected by what happens there, I would urge you to reconsider.  Here are a few reasons why you should care about the future of Northgate:

Northgate is a regional growth center.  What does that mean?  It means you can expect to see significant growth in population and employment in the Northgate area in the coming years. As stated in the Northgate Urban Center Rezone FEIS:

“In 2003 the City adopted Resolution 30642 to “accomplish future steps for Northgate [including] economic development efforts, multi-family housing incentives, multi-modal transportation, pedestrian and open space improvements, integrated natural drainage strategies, sustainable design and green building, public art, planning for major commercial and multi-family residential development, and meaningful community involvement in these actions.” These steps have led to numerous new public and private development projects that are revitalizing the Northgate Urban Center. The City wants to ensure that recent momentum is sustained, that growth can be accommodated, and to achieve the overarching goal of the Northgate Area Comprehensive Plan (NACP), which is to “transform an auto-oriented landscape to a pedestrian friendly destination with densities to support transit.”

The takeaway: With significant employment and population growth slated for Northgate, it's possible you might end up working or even living here someday.

Sound Transit's Northgate light rail station is opening in 2020. Now you might be thinking that’s wonderful for people who live there, but it won't benefit me, when in fact, it just might.  For starters, more people will be taking transit, lots more.  The Northgate light rail station is projected to serve approximately 15,200 boardings a day in 2030!  Even if you don't end up living or working in the Northgate area, there are regional implications of more people using transit --- for instance improved air quality, improved health and quality of life, reduced congestion and improved commutes, and a better economy (as people shift from single occupancy driving to transit, they can save money – which means more money can filter back into the local economy).

With light rail comes the opportunity to provide transit oriented development (TOD) and we’ll take that a step further to say trail oriented development (TrOD) as well.  TOD and TrOD has incredible potential to establish more sustainable communities where people can and do walk and bike, and of course take transit, to destinations.  Focused growth around transit stations, like the future Northgate light rail station, with connected bicycle and pedestrian networks, can effectively foster mode shift while creating more livable communities. And if you're still not convinced about potential attractiveness of Northgate, did you know that it will only take 14 minutes by light rail to downtown Seattle? Not a bad commute if you ask me!

The takeaway: You may want to live here someday.

The major takeaway from all of this is that if you aren't already, someday you may be affected by what happens at Northgate, and now’s your opportunity to have a voice in the matter.

Now that I’ve belabored the “why you should care” point, let’s consider how the bicycle can play into the future of Northgate.

The thought of bicycling to Northgate with the current infrastructure may not be the most attractive concept to many people.  For starters, it is divided by I-5 – a major impediment to east-west bicycle and pedestrian travel.  In addition to I-5, the Northgate center has historically been dominated by automobiles and auto-centric land use patterns.

While the bicycle has incredible potential to serve as a viable mode -- not to mention healthy -- to the Northgate urban center and light rail station, a connected network of safe bicycle facilities will be a necessary ingredient to realizing this potential.  By providing safe bicycle access to the Northgate station, the opportunity exists to reduce the demand for auto-centric land uses around the station, while generating additional ridership for both transit and bicycling.

If bicycling to Northgate is something that might appeal to you or someone you know, be sure to advocate for improved bicycle access to the station. For instance, you might encourage Sound Transit and King County to work with the city of Seattle to further implement the Bicycle Master Plan around the Northgate station. The maps below show the existing bicycle infrastructure and what a built-out bicycle master plan would mean for Northgate. 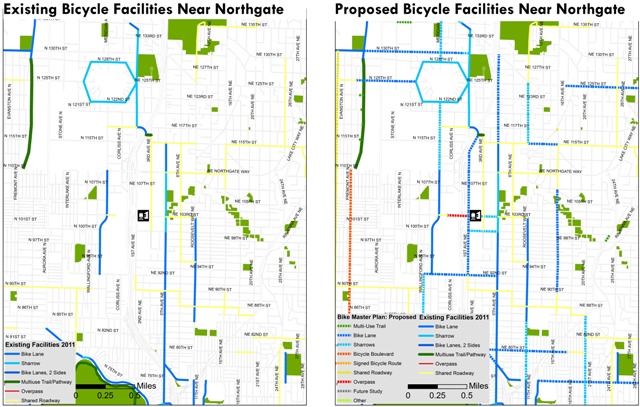 One option that’s on the table is a pedestrian/bicycle bridge over I-5. This is proposed in the Seattle Bicycle Master Plan and is currently being reviewed by King County.  The bridge would provide additional connectivity in an area that lacks bicycle and pedestrian connections – the following maps show how a 1-mile catchment area (walking or biking distance) from the Northgate light rail station would grow, given the development of this bridge. And keep in mind this is only 1 mile. 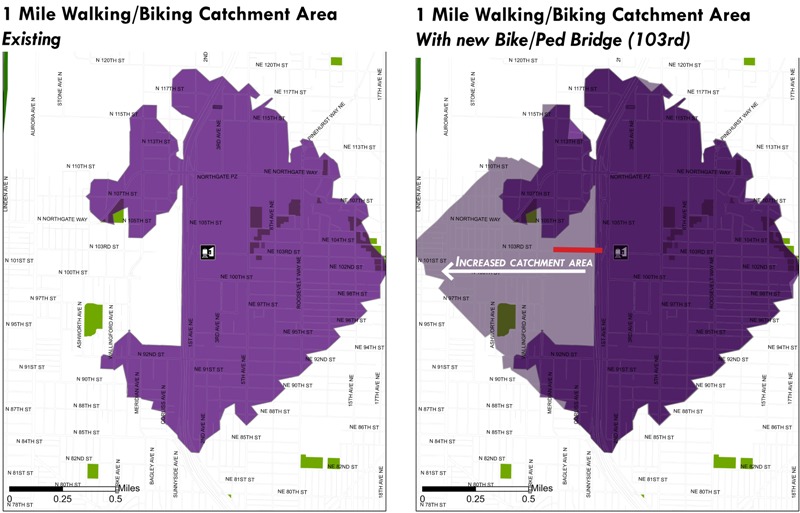 While there are several different plans that have been developed for the Northgate area, there are still opportunities to influence the future of Northgate, particularly as it pertains to the light rail.

We encourage you to participate in the upcoming Nov. 9 Northgate Station public meeting and voice your thoughts about the importance of bicycle access to and through the station area.  Feel free to provide specific information about how you would like to see the bicycle network developed in the Northgate area– for instance, would you like to see a pedestrian/bicycle overpass over I-5?

Meanwhile, you can always provide input through other ongoing public processes – for example, Seattle is in the process of updating their Comprehensive Plan – so is King County.  You can use these opportunities to stress the importance of bicycle access – be it to light rail, your place of work, or the store.

Thanks for reading and stay tuned for more opportunities to get involved!

Ruth Williams
Mon. May 21, 2012 3:27pm
It's wonderful that bikes and pedestrians are finally coming into the foreground now! However, Feet First has done a great deal of ground-truthing in this neighborhood, but I don't see that work incorporated here. http://feetfirst.org/assets/maps/091118%20-%20NEST%20Map%20-%20Final.pdf For example, 8th Ave. NE is a designated pedestrian corridor. Why isn't it also a bike route? NE 105th between 5th Ave. NE and 8th Ave. NE is a one lane street totally inadequate for cars. That also should be a bikeway.

Richard Kosterman
Tue. Nov 8, 2011 9:44am
I'm planning to go to the NG meeting and advocate for bikes. It would really be helpful if I could see the maps above, but when I click them to blow them up, it says "error." Can you please fix this asap. Thanks!!