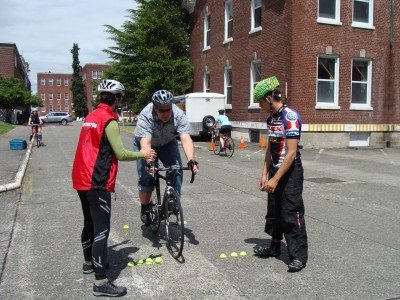 At the end of September I took Cascade’s Urban Cycling Techniques class at Magnuson Park. As a new employee and novice bike commuter, I thought it would help to learn the skills necessary to ride safely and confidently on my city’s streets and bike paths.

Plus, I’ll admit it: I was getting scared. In my first month on the job at Cascade, I’ve heard stories about wipeouts, near misses, full-on crashes and other bicycling mishaps. Here I am, charged with the task of writing about all things bicycle, and part of me was suddenly hesitant to jump on my own set o’ wheels.

Within moments of the start of class, I learned that I was not alone. As students introduced themselves around the table, safety and confidence came up again and again as reasons for enrolling in Urban Cycling Techniques. (It is perhaps no surprise that all but one of us were women, a demographic that generally reports safety as a major barrier to bicycling.)

Theresa, who lives in downtown Seattle, said she wants to learn to get around her neighborhood “without getting killed.”

And Lori, who was rear-ended by a car when bicycling four years ago, wants to build the confidence to climb back in the saddle.

We urban cyclists were in the right place!

The goal of Urban Cycling Techniques is to teach bicyclists to interact positively and safely with urban traffic, so we can ride through intersections, coexist with cars and otherwise assertively negotiate the city jungle. The class—I have to say—was a fun, encouraging and informative way to learn the basics.

There was a classroom portion, in which we:

Then there were activities outside, including:

The outdoor exercises challenged my comfort level, for sure, but there’s something about facing your fears and practicing new skills that’s very empowering. 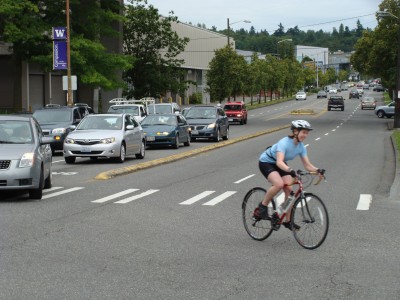 And one part of class reassured me immensely.

Instructors Ellen and Katie led us through an exercise to demonstrate the causes of bike crashes. The culminating message was this: when cyclists learn and employ safe bicycling techniques, they can control and therefore steer clear of 80 percent of all crashes! In our very uncertain world, that’s A LOT that we can control.

So there it is: One weekend of cycle education plus one comforting statistic, and I’m feeling—no, I actually AM—safer on my bike already.

I wholeheartedly recommend Urban Cycling Techniques for anyone seeking to feel confident on the road while maximizing the fun and freedom your bike affords you. Check it out.

Urban Cycling Techniques is held, generally, once a month in Seattle—with occasional classes outside the city. See our calendar for more information and to register. (Cascade members get a discount!) And let us know if you’d be interested in Urban Cycling Techniques coming to Bellevue, Burien, Redmond, Tacoma or the Kitsap peninsula—just call Robin at (206) 446-7457.

auviga auviga
Fri. Dec 10, 2010 5:36pm
Hi Stacy, Thanks so much for writing this. I hope that this post has encouraged others to take this course. I really cannot stress how valuable this class was to me. I feel a lot more confident biking on the streets of downtown and Capitol Hill on my daily commute with the knowledge I gained about interacting with car traffic and with the cycling techniques that I learned. It is a lot less scary now! -Aurilee

Back to school means new learning opportunities for all